Beginning in December 2007, the United States suffered an economic downturn considered to be the worst financial crisis since the Great Depression. During this time period, layoffs increased at an alarming rate. In the fourth quarter of 2007 there were 5.7 million layoffs. By the first quarter of 2009, that number had quickly grown to 7.6 million—a 34% increase. The unemployment rate grew from 5.0% in December, 2007 to 9.5% by the end of the recession in June 2009. 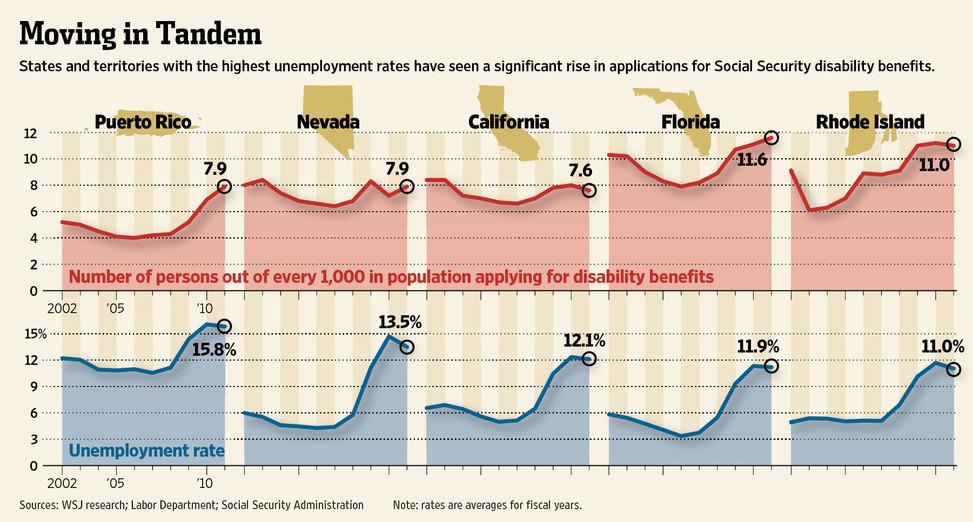 Although the rapid growth of disability claims would seem to indicate a general decline in the nation’s health, the coinciding rise and fall of the unemployment rate suggests that there may be a different explanation.

Goss suggests that an increase in disability claims during an economic downturn is to be expected. He comments, “When employment is good—when employers are trying to employ lots of people—people with impairments, like everyone else, find it easier to find a job."

Unfortunately, when employment is bad, individuals with disabilities are among the first to be laid off. In an economic downturn, employers who were previously willing to accommodate individuals with disabilities can no longer afford to do so. Older, partially disabled workers lose their jobs and are forced to seek out other ways to support themselves.

An academic study conducted by Matthew Rutledge reports that jobless individuals often turn to disability benefits once they have exhausted their unemployment insurance. This suggests that when jobs are scarce, individuals who would have previously worked despite a disability are turning to Social Security Disability benefits.

Is the Economic Downturn Responsible for the Current Instability of the Social Security Disability Program?

The following table demonstrates the growth in approved disability applications:

*Data from the Social Security Administration

Although the poor economy has contributed to the rapid growth of the Social Security Disability program, Kathy Ruffing, senior fellow at the Center on Budget and Policy Priorities, suggests that the rise in disability rolls can also be attributed to demographic changes: 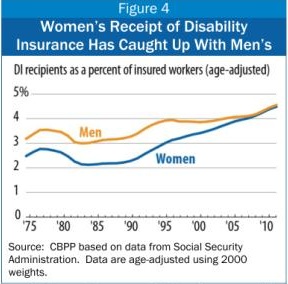 The financially strapped Social Security Disability program has become the focus of national scrutiny. Media stories and academic studies are quick to credit the bad economy for the program’s instability. Although the cause is still being debated, it is evident that the disability rolls have grown rapidly—in a manner that, financially, cannot be sustained.

The flood of new applications has drastically slowed the approval time and the Social Security Administration cannot keep pace. The backlog of applications is keeping the severely disabled from getting the benefits they need to survive. With the Social Security Disability Insurance trust fund running low and the application process often taking up to two years, the need for change is imminent.

The economic downturn and the rise in Social Security Disability rolls are undoubtedly connected. This indicates that, if the economy were to heal, the number of people applying for disability benefits will decrease. However, there are many factors that have led to the program’s rapid expansion and unfortunately, there is not one clear-cut solution that will address all of them.

In the coming weeks policy makers will reach decisions to implement tax increases and spending cuts in an attempt to remedy the country’s budget deficit. As of right now, it is unclear how these changes will affect the Social Security Disability program. One thing is evident-- If a solution is not found quickly, the future is uncertain for the countless individuals who depend on disability benefits.

In reply to What is sga by Stephan lane (not verified)

Hi Stephan,
To be eligible for disability benefits, a person must be unable to engage in substantial gainful activity (SGA). A person who is earning more than a certain monthly amount (net of impairment-related work expenses) is ordinarily considered to be engaging in SGA. The amount of monthly earnings considered as SGA depends on the nature of a person's disability.

I know a person who was fire

I know a person who was fire cheif of a fire company, works on cars, goes metal detecting every other day and does remodeling in his home! The person recieves disability for detoriated disk in back! If he can do all this how can he recieve disability! This guy isnt even 40 years old! Besides him there is 3 others in the home 2 on disability and one who works! How????????

Hi RayInn,
While he can do those things, they may not be strenuous enough to be considered work activities, or his condition is severe enough to be unable to work, but not enough to leave him unable to do those listed activities.

My landlord wants to use most

My landlord wants to use most of my children ssi benefits for my rent can they do that? How am I suppose to get them most of the things they need if my landlord is taking the majority of they benefits?

Hi Tashone,
Your landlord may not be legally able to do that, as those benefits are intended to pay a portion of that rent, but not all of it.

In reply to My friend draws disabled by Sam (not verified)

Hi Sam,
that money may be considered income the month that this person receives it and a financial resource for the months after, so that may affect any income-based benefits they receive.

I plan on getting married in

I plan on getting married in May. I’m on Ssdi and live in Indiana. My fieance is on Ssdi also and currently live in Kennedy. We haven’t 100% made our minds up yet as to which state to live in at the moment but we do have plans to move close to family in Indiana in the near future. Also we want to know if our Ssdi benefits will be affected in any way? We do have one dependent child under my fieance’s ssdi. Will this be affected in anyway?

When you get married, your SSDI benefits will not be affected. SSDI is based on individual record and not income.

Also if you move to another state, your benefits won't be affected because Social Security is a federal, not a state program. You should notify the SSA if you do plan to move, though.